Of Masks and Men 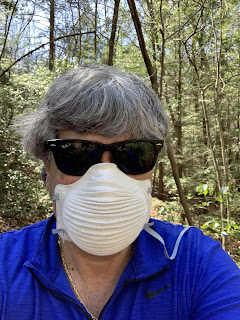 Our “Wild West” mentality may work well if you have a gun and the enemy is visible.  Not so much in the invisible world of biodefense.
And this is truly a Biodefense issue.
We are at war.
(The virus doesn’t care, by the way...)
I have been working in the life sciences as a biomedical engineer in a preclinical setting for about 15 years now. (Before that it was mostly in the automotive/aerospace industry.) In my work, I have been involved (mostly behind the scenes) with hundreds of scientists assessing the respiratory, cardiovascular, and neurological effects of various infectious agents and therapeutics to fight them. Natural and man-made. I know - and worked with - a number of organizations dedicated to address exactly this kind of enemy. I’ve worked with scientists from BARDA, USAMRIID, USAMRICD, and many others. I have worked with several groups around the country. I’ve seen the inside of BSL-3 and BSL-4 labs, where they work with stuff that makes this virus look like a tummy ache.
I know things and have seen things that you don’t want to know about.
The people I know in this field are some of the smartest, bravest, most dedicated people I’ve ever met.
But they need us to help.
Our best - no, our ONLY weapon is a mask.
Don’t bet your future on a vaccine that may or may not exist in a year or two. And the science isn’t there to determine how long  the antibodies the survivors produce will last.
In some ways, this is a perfect killer. Highly transmissible, but with a mortality rate low enough to not “burn itself out”, slowly and steadily reproducing and killing at a steady rate...The low mortality rate also gives a false sense of security, despite being 10x more deadly than a normal influenza strain.
And there are no good treatments, no silver bullets - in the pipeline. Even Remdisivir is not a silver bullet, but it might - might - help keep you alive a few days longer while under a ventilator.
This virus transmits almost exclusively by infected individuals that are involuntarily shooting invisible “Poisoned bullets” into the air... If the bullets containing the viral load are attached to a mucous droplet larger than a few millionths of a meter, they fly a few feet (the distance they travel is a function of the velocity of the particle when it is expelled from the airway, the mass, the buoyancy of air, and the velocity of the wind, and of course gravity). As it lands, it creates “fomites”, Or inanimate objects that transmit the virus.
If instead the viral load is even more stealthy and attaches to an aerosol particle, the mass is much lower, meaning the particle can travel much, much further until it “sticks” to something (hopefully the ground, and not becoming another’s fomite).
Not having a host to connect to, the virus eventually decomposes and is no longer virulent.
That’s the simple physics of the problem.
So what does a mask do?  It depends... What it DOES do (this has yet to be disproven) is capture a majority of the “mucous bullets” discharged during forced expiration due to breathing, talking, coughing or sneezing. A mask will reduce the risk of droplets becomIng airborne as they are captured by the fibers of the mask. The better the fiber, the better the efficiency.
The mask also prevents surfaces from being shot with these “snot bullets”.
“Ok, cool. It helps reduce the spread from me to others. But I don’t have it.”  No. Unless you have a PCR COVID-19 test, you have no idea whether you have it or not. That’s what is making this disease so ubiquitous.
Will the mask help me?  Possibly. But unless your N95 (or similar) is perfectly sealed, there still is risk, but the risk is reduced.
This isn’t about left or right ideology. This isn’t about “personal freedom”. This is about fighting an enemy to the species. The only way we can fight this disease is to hide from it. Americans have a hard time accepting this.
I fear we have a hard lesson to learn.

Popular posts from this blog

June 01, 2020
Hello, and welcome to WritingsOnTheSand.com! I'm writing this blog to share what interests me without pushing it into your face through social media. Consider this my personal indulgence, and feel free to come and go as you please. You are welcome to join me here in my adventures. I hope to use this space to express my personal views on technology, society, and whatever other shiny things I come across and want to share....
Read more

Mike Bower
Hi! I am a Senior Biomedical Engineer for a Paris, France Based Biotechnology company, and the Chief Technology Officer of Brilliant Sole, a Wilmington, NC based startup. I create data acquisition and signal processing solutions for for preclinical biomedical research, with a specialization in Pulmonary and Cardiovascular, Neuroscience, and Biomechanics. I'm a widowed father of two grown kids, three step kids, and two grand step-children. I travel a lot, but place my roots between my home in Wilmington North Carolina, and my old hometown in Northeast PA. I'm interested in science and engineering, travel, philosophy, and positivity.